The following excerpt is taken from the upcoming second volume of the dEaDINBURGH: Din Eidyn Corpus and details the insertion of Michelle MacLeod into the dead city.

Michelle is the mother of one of my lead characters from Book 1 and is thirty one years old at the time of the excerpt.

IF YOU HAVE NOT READ dEaDINBURGH: BOOK 1 DO NOT READ ON

The following excerpt is Pre-Edit and copyright of Mark Wilson and Paddy’s Daddy Publishing Ltd:

Michelle woke to find herself laid face-down on a very cool-feeling white tiled floor. The cool-sensation wasn’t entirely unwelcome and helped her focus on something and pull her tangled thoughts together into a semi straight thought process. Her hand went immediately to her abdomen and lay there for a few seconds. Unsure what reassurance she gained from the gesture, she welcomed it regardless of how superficial.

Rolling onto her back, her head swam and her neck ached with the effort. Opening her eyes seemed an insurmountable challenge, a mountain too steep to conquer. An image of her student days, waking on Darcie’s floor after a hard night’s drinking and dancing came to mind, but left as quickly as it came. Not many nuggets of information were presenting themselves to her ever more alert mind regarding her current whereabouts or situation, but she knew for certain that alcohol hadn’t been a factor, having eliminated it from her life some fourteen weeks before.

She blinked hard six or seven times and finally managed to get her eyes in focus. Nothing she looked at made any kind of sense. Michelle sat up groggily and rubbed at her gluey eyes. She felt her pupils contract in response to the clinically harsh, xenon glare of the lights blasting the unfamiliar too-white room and laughed at the absurdity of the dream she was surely having.

Looking down at her own body, she found herself clothed in rags. Filthy sack-like canvas shirt covered her upper body loosely. Men’s trousers three sizes too big and rancid, really truly rancid, draped her lower half. She fought down a familiar nausea as the waft from them hit her senses. She wore no underwear and subconsciously pulled her arms around herself.

As the brightness became normal, she became aware that she wasn’t alone. Far from it. Moving her eyes was painful, so she rotated her pounding head on aching vertebrae and scanned the room. Perhaps ninety people lay in various states of consciousness. Men, boys, women and girls, lay around her on the pristine, sterile floor of the very white room.

All were clothed as she was. Some looked at her, like a child looks at a parent for answers, for reassurance, simply because she was the most alert-looking in the room. Many were too busy looking down at themselves or around the room, wondering what they wore and where they were. Michelle’s eyes teared-up as they flitted from one face to another. Some were scared white. Others shook their heads certain, as she herself was, that they’d awake somewhere warm and familiar at any moment. Most were starting to panic as they became fully awake. None of them looked to be anything other than very ordinary, very scared people.

One man started laughing loudly, causing Michelle to jump at the suddenness and intensity of his Sid James-esque bray. In other circumstances she’d have laughed along with the man and described his laugh as the dirtiest she’d ever heard. Today, in this place the man’s laugh was the sound of his sanity rustling as it left him and breaking against the white walls. Today the laugh was truly terrifying and corrupting to the tenuous grip on sanity held by the room’s inhabitants.

Michelle shut the noise out and focused on a group of seven people who still lay prone near the only door visible to her. A few others had started to move towards them also, drawn by their relative stillness. As Michelle drew nearer the group of people- a mixture of adults and children, male and female- she noticed that each of the group weren’t as still as they’d seemed from the other side of the room.

They were twitching and jerking, only slightly, like someone in the depths of a nightmare. Michelle felt a laugh of her own escape. Irony always had made her laugh.

Pushing her way gently past the little group of stunned people gathered around the apparently asleep people on the floor, she mentally swatted away the mist of a thought that was beginning to surface and placed a hand on the nearest boy’s forehead. The boy was burning up with fever. A quick glance at the other sweat-soaked faces in the group confirmed that they all were fevering. And then she saw the wounds.

Michelle’s eyes widened with horror as her subconscious pushed harder and filled her mind’s-eye with thousands of images of people she’d seen in the same condition. People in the latter stages of infection. People who’d been bitten. Infected.

Without guile or embarrassment she pulled the filthy clothes from her body and searched every visible inch of herself for bite marks. She pulled a man who stood next to her close and asked him to look in all the places she couldn’t see. Without asking, she pulled his shirt and trousers from him. Too stunned to protest, he allowed her to check for bites. Word spread, quickly. Within minutes everyone in the room was naked and checking each other for any signs of broken skin.

Eventually each of the room’s occupants, silently dressed once more, relief smashed aside with returning panic. Why? Why were they here? Three things happened in the next five seconds to make their question the last thing they needed to worry about.

A loud clang rang out and bounced around the tiles of the room. Many of the people jumped in fright. Some of them disappeared, dropping through the large trapdoor that had fallen six feet from the pristine white floor to a barely-lit tunnel below, forming a slippery white tiled ramp into the darkness.

Many of the people in the room stood and gaped into the darkness, but only for a single second. Only until the loud scream of a child at the rear of the group snapped everyone’s attention around to the fevering group of almost dead at the main doors. Almost dead, now fully risen and attacking people closest to them with a bottomless, vicious hunger that tore flesh from bone and limb from socket. All of those present had seen the show. It didn’t need said, but one man, the still-laughing man, felt the need to shout out the obvious.

He was positively gleeful. Until a newly animated Ringed tore his throat out with its clawed hands and devoured the flesh.

Like a wave of pestilence The Ringed moved throughout the room, tearing, biting and clawing with the strength and speed of the newly risen, at the room’s panicked occupants.

Michelle MacLeod saw none of this. As soon as the trap door had slammed into the darkness, she’d become a blur of movement. No thought, just deed. Launching herself along the tunnel, Michelle shouldered each of the people in her path aside. Leaving them in a wake of bewilderment, she cut through the darkness, one hand grabbing the loose waist of the men’s trousers she wore into a fist, the other reached out in front of her, searching through the darkness.

Her fingers cracked against a wooden panel, causing a jolt of nerve pain to lightning up her arm and the panel to dislodge. A crack of very strong sunlight lasered through the gap she’d made. She saw the dust and dirt she’d swept along with her swirl around in the biblical shaft of light that cut through the tunnel’s blackness and took a second to shout back to the other people, if people they still were.

Shouldering through the panel of MDF, Michelle clattered onto the earth outside and shut her eyes against the brightness of the day. Beneath her eyelids, her eyes still hurt, such was the intensity of the Edinburgh, sunshine and the contrasting darkness of the tunnel. Placing a hand over her closed eyes she gave her pupils the dangerous few seconds they needed to contract and tentatively peered beneath her eyelids.

The world was a cacophony of colours in the air and the flora and fauna. She looked down a landscaped apart of the countryside. Trees and bushes, grasses and shrubs, all filled with bright berries, flowers and fruit shone alongside a straight, concrete path cutting through the beauty of the landscape. The fauna, perhaps a hundred yards along the path, hadn’t noticed her yet, but with the screaming coming along the tunnel behind her, their desiccated faces and mouldering teeth would turn her way soon.

Michelle blinked stupidly into the sun and let out a quiet sneeze. She’d always been a sun-sneezer. Her friends had mocked her playfully for it, but she’d always liked the trait she shared with her mother. Her eyes darted to a meadow to her right and picked out the unmoving body of a dead, truly dead, Ringed. She moved with speed towards the partially-rotted pile of bones and decayed flesh that not even the maggots feasted on.

Picking up the fleshiest part she could see- badly putrefied quadriceps- Michelle covered her exposed flesh and already rancid clothing in the black, jelly like fluids of the decaying Ringed. She coated her face, and carefully applied congealed fluid that had once been blood as though it were her favourite make-up. Taking her time, she flicked away the little clots that threatened to make her vomit despite the state of cold calculation her mind had entered, and smoothed fold blackened paste-like flesh over her own skin. When Michelle had finished her task she looked as though she’d fallen into a container of rotted offal.

Taking a belt from the trousers of The Ringed she’d coated herself in, Michell tied it around her waist, gathering the folds of fabric together, hurting her waist with the tightness of the leather. She shut herself off to the loud moans of dusty hunger and the wet tear of torn cracked teeth on flesh coming from the cycle path at the tunnel’s exit. Nothing to do. Nothing I can do. Just move. Years of images flooded her mind once more. Information on operation she’d been privy to as a board-member of the UKBC flooded her mind along with detailed layouts, blueprints and maps of the dead city.

Subconsciously she placed her hand over her slightly protruding uterus, absorbed strength and purpose from it, decided on a destination, and used the other gift her mother had given her. A lifelong stamina athlete, Michelle MacLeod ran like she’d never run in her whole life.

dEaDINBURGH: Din Eidyn Corpus 2 is due for release by Paddy’s Daddy Publishing in late January, 2015. 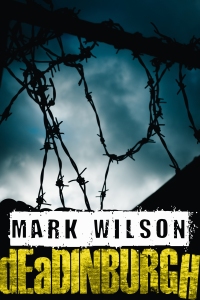 dEaDINBURGH: Din Eidyn Corpus 3 is due for release by Paddy’s Daddy Publishing in late February, 2015.

You can find Mark Wilson and his books at Amazon, US and Amazon, UK.