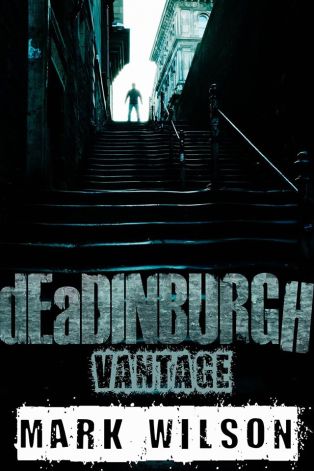 Edinburgh, 1645:
The bubonic plague rages. In a desperate attempt to quarantine the infected, the city leaders seal the residents of Mary King’s Close in their underground homes.

2015:
Mary King’s Close is reopened, unleashing a mutated plague upon the city residents. The Ringed are loose and they are hungry.
The UK government seal the survivors inside newly-erected fences.
dEaDINBURGH is declared a no man’s land, its residents left for dead and to the dead.

2050:
Joseph MacLeod, born onto the cobbles of the Royal Mile and stolen from the clutches of the infected is determined to escape the quarantined city. Under the guidance of former marine Padre Jock, he leaves the confines, and relative safety, of the city centre to hone his skills and learn to survive amongst The Ringed.

Alys Shephard, born into an all-women farming community believes a cure lies in the south of the quarantined zone. By far the most skilled combatant in the dead city, Alys burns with anger. The anger of an abandoned child.

Something much worse than The Ringed waits for them in the south, in the form of a religious cult led by a madman named Somna who collects gruesome trophies and worships the dead body of a former celebrity. Added to this the enigmatic Bracha, a supreme survivalist and sadistic former-royal with his own agenda, stalks Joey and Alys.

A self-contained story, dEaDINBURGH is a character-driven Dystopian/Horror novel, exploring the human capacity for good, evil and for survival. Inspired by George A Romero’s ‘Dawn of the Dead’, the works of Robert Kirkman and Jonathan Maberry’s ‘Rot and Ruin’ series.

Praise for dEaDINBURGH:
“dEaDINBURGH is an intriguing read, and a breathtakingly assured and fearless foray into Horror writing by an author who literally takes it up a gear with every new release he unleashes into the world.”- Ryan Bracha, author of Tomorrow’s Chip Paper and The Dead Man Series.

What the Readers say:
“Wilson has created a story of horror, yes, definitely, but it’s also one of friendship, loyalty, betrayal and intrigue with a good dash of humour.”

“Throughout this novel, the reader is given tantalising pieces of information which ratchets up the tension.”

“The plot had me screaming out loud, normally I see the plot coming from a mile away. Boy, this one had me surprised.”

“For a book that’s considered young adult, I found it very realistic, harsh, and mature in its themes of friendship, survival and family. There is no fluff in this story. Oh, and did I mention the twist at the end? Never saw that coming.”

“I think I liked this better than Rot and Ruin…just don’t tell Jonathan Mayberry.”

“This book for me was more than just another zombie story it was a story of how humankind adapts and changes in order to survive.”